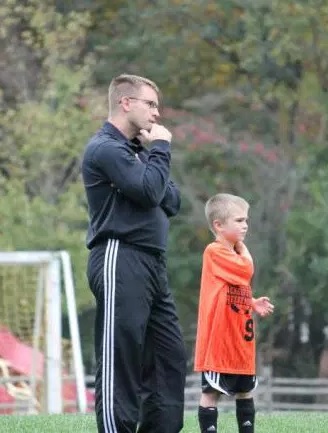 It was many years ago but I’ve still not encountered a better example.  I was the field marshal at a youth tournament in Pennsylvania.  The players were under twelve years old and engaged in a very back and forth game.  One team was extremely adept at the offside trap.  Late in the game, there was a corner kick.  The cross was cleared out of the penalty box and the defense pushed up.  The ball fell to the foot of a offensive player about 30 yards from goal.  He shot.  The ball rocketed toward the goal and hit the post.  The rebound fell to a forward who was slow getting back onside and he scored.  The referee instantly called offside and awarded a free kick to the defense.  The coach of the team that had the goal disallowed went ballistic.  He screamed about how “ridiculous” the call was and asked about the referees sight, etc.  As the field marshal I felt that it was my job to diffuse the situation in order to avoid it interfering with the game.  I said, “Coach, if you’d like, I can explain to you why that was the right call.”  He responded, “I know it was the right call!  I’m just blowing off some steam.”

In most cases, soccer is not a life or death situation.  It’s a passion, diversion, recreation, fun or even a teacher.  The game has the possibility to do so many things because it garners the emotions of the people around it.  There is nothing inherently wrong with emotion.  We need them to live and color our lives.  However emotion without any sense of reason is problematic.  The word was chosen very deliberately.  REASON!  The reason why we’re there in the first place gets lost when we cannot control our emotions.  Referees become demons.  Opponents become enemies and sense of our self-interest overrides the judgment that we use elsewhere.  This is not so much of a problem when it is a single person.  However it seems to have become a societal norm.

The steam that so many people are letting off is clouding our vision.  The ability to see what is right in front of our faces.  Children.  Children who are looking at us for how to act.  Not just on a soccer field on Saturdays or Sundays but in their daily lives.  When something doesn’t go their way, they’re supposed to have an emotion freak out session because that’s what you do.  You don’t take a breath and refocus on the task at hand.  You don’t see the bigger picture.  You don’t recognize that human error is part of life and needs to be coped with.  Those things aren’t done because they’re hard.  They require effort, judgement and self-control.  These skills are difficult to develop, especially when you’re a child, watching the adults act like children.

So don’t breathe in the steam, just breathe!  Recognize that the children on the field have spent hours this week trying to improve their skills in order to perform for you.  Put your focus on that.  Double, triple or quadruple your focus on the fact that these are kids, trying to do something that is difficult.  AND DIFFICULT THINGS ARE THE ONLY ONES WORTH PURSUING!  So don’t produce steam, produce esteem for what everyone on that field is trying to do.

See you on the field! 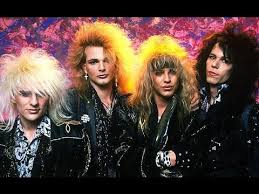 Although the 1980’s were memorable for many reasons, the crazy hair is probably one of the most prevalent.  Big hair was all the rage at the time.  Many of the 80’s rock bands invested a lot of time and money on their hair.  Image was almost more important than the music.  I’ve even heard interviews with bands who tried to gain information on the hair products of more successful bands in order to copy their formula.  It’s a silly image isn’t it?  Grown men hanging their hopes of musical success on the type of hairspray that they use.  There is a disconnect that should have been obvious to all involved but sometimes people are too close to the situation to see their own ridiculousness.

A similar phenomena is rampant in the soccer world and a good hard look in the mirror is more than overdue.  Each and every week, millions of kids and adults practice their skills of passing, dribbling, heading and shooting.  Coaches spend hours trying to help these players improve their skills and coalesce the group’s talents into tactics.  Meticulous care is given to all facets of the game including set plays on both the offensive and defensive side.  After hours of preparation, game day finally arrives.  The first whistle blows and that training seems to take a backseat.  It’s overshadowed by telling the one person not displaying any soccer skill about how badly he or she is doing.  The referee takes center stage in a contest that should be focused on the soccer skills of the players.  Much like the hairspray obsessed rock bands, the coaches, players and fans have taken something that should be incidental and made it THE big deal.

Having been a high school and youth coach for years, I’ve seen the lower level of refereeing on display.  While frustrating at times, the arbiter of the game should not overshadow all of the preparation that has been done.  Here are some suggestions that I have to put refereeing in its proper context.

So as you prepare for this weekend’s contest, make a decision to focus on the game rather than the official.  After over 35 years of playing and coaching there are exactly two things that I’m sure of:  1.  All referees make mistakes.  2. They don’t get better or change their calls because you tell them that they suck.  For the love of the game, let’s all try to do better out there.  The hair bands can look back and be amused.  Let’s not all look back and be ashamed.

It’s a bit older now but still a good message from the English FA.