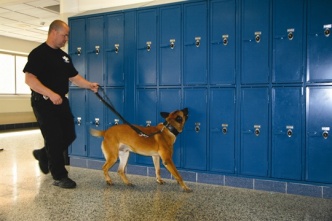 During my sophomore year of college, my two younger brothers were in high school together.  One was a senior and the other was a freshman.  At one point during the school year, there were “Drug sniffing” dogs brought in to do a search of the school.  Students stayed in their classes while the school was swept.  If your locker was tagged, you were supposed to report to the office in order to have your locker searched.  My freshman brother’s locker had a tag on it.  Completely panicked, he went and found his senior brother.  One question from the senior brother, “Do you have any drugs in your locker?”  The response was “no”.  The senior brother went straight to the office and reported that his locker had been tagged.  He brought the officials to the locker for it to be searched.  The school officials questioned whether this was really his locker or not because it was in a freshman hallway.  My brother was adamant!  This is my locker!  Upon being opened and searched, the locker did not contain any drugs.  There was however a half eaten box of crackers at the bottom which the dog must have smelled.  I wasn’t there and no one has discussed that incident for years but I still get choked up when thinking about it.

As I am going through preseason as a coach, I am always trying to instill in my players through my words and my actions, the exact sentiment that my younger brother displayed that day.  I’LL GO FOR YOU!  The idea that I’ll put myself in harm’s way for the good of others.  It’s one of the main reasons why I’m still involved in sports after all of these years.  It’s not the championships, trophies or victories.  It’s those moments when you can truly see that people throughout the team have that simple idea tattooed on their brains “I’ll go for you!”  I’ll give you everything that I’ve got and then some because I know that you’d do the same for me.

The ironic thing is that this has become so very rare in our society but the teams that I’ve seen do the best had this.  People are usually worried about what’s in it for them and when will they get their due.  In my experience, it seems to be that when you are willing to give everything and expect nothing, is exactly the time when you get more than your due.  This can be a difficult concept for a large group of people to buy into but when they do, it can be magical.

The best example of this idea that I’ve ever heard of was when Brett Favre of the Green Bay Packers had his father pass away.  There was some doubt whether or not he’d play the next game.  It’s not his decision to play that I find extraordinary but rather his teammates commitment to him.  In this video clip about the game at 2:19 Donald Driver (Wide Receiver) describes exactly what I’ve been talking about.  “Whatever he throws, we catch.”  In a time of pain for their teammate, they were not going to let him fail.  That’s what being a teammate and a family member is about.

Now don’t misread my words!  Not everyone deserves everything you’ve got but if no one is willing to go first then we all lose.  So be the one who is willing to give into the unknown.  Tell the people who truly matter with both your words and your actions; “I’LL GO FOR YOU!”  Most of the time you’ll find, they’ll go for you too!