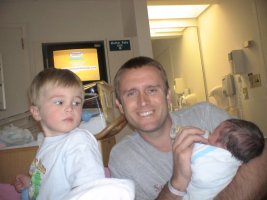 I have a very clear recollection of the day that I passed the test that told me that I was ready to be a father.  I was on the bottom floor of my in-laws’ house on a lake in Virginia.  A strange sound came from outside that I didn’t recognize.  A few seconds later my wife screamed my name.  It was the kind of scream that I knew something was wrong.  I jumped up and sprinted out the door.  When I reached my wife on the deck outside, I quickly found out the source of the sound and why she screamed.  Our dog, Kelme, was pinned down by another dog that was attacking him.  The two dogs were about ten feet below the deck on the rocks that sloped down toward the lake.  Without a moment’s hesitation, I jumped over the deck’s railing and dropped the ten feet landing next to the two dogs.  Luckily my sudden appearance and loud shouts were enough to scare the dog off without my having to fight him.  I picked up Kelme and raced him to the vet with my wife.  His wounds were very minor and he made a full and energetic recovery.  It was after that incident that I knew for sure that I could be a father. 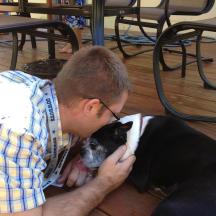 Not everyone gets that type of real life test that tells them something important about themselves.  Generally people have to take a leap of faith that they can handle the situation.  The phrase there is not unimportant, “leap”.  I can’t say for certain whether I would have gotten the same type of self-assurance from that situation had I run down the stairs to Kelme’s aid.  The jump was important because it separated me completely from safety and put me directly into harm’s way: both from the rocks and the dog.  The willingness to take the risk of the leap was key.  Lives don’t need to be at stake.  Broken limbs and dog attacks don’t need to be risked.

The keys to any endeavor of creation: child, book, movie, relationship, song, poem, etc. are the leap and the foregoing of self.  Neither is particularly easy to do.  Leaping requires a detachment from the stability of the known world for something much more uncertain.  Putting something else before ourselves is also an exercise in chance.  With both, fear is a major opposing force.  While fear is an emotion that is intended to protect us from pain, it is often the force that keeps us from living fully.  A full life is one that requires creation and therefore risk.  There are no diplomas, courses or tests that can prepare you to live fully.  It is something that needs to be done on the fly everyday with consistent action.  The act of leaping may never become completely comfortable but it may just become completely worth it.