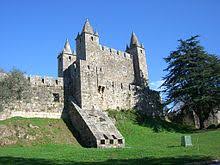 At certain point in history, in particular parts of the world, the wealthiest people such as kings lived in castles.  I’m sure many people have fantasized about living in a castle.  The fantasy probably does not mirror the reality of what it was like hundreds of years ago.  By comparison, the comforts of most of our modern day houses outshines castle living.  Castles were made of cold stone without heat or air conditioning.  Although they served as protection from the elements in some ways, there was no escaping the fact that survival was the order of the day and not comfort.

In the past month, I’ve challenged myself to take cold showers every morning.  This has been an eye opening experience for a variety of reasons.  Although I started it for a variety of health benefits, it has actually been the change in perspective that I’ve noticed the most.  The key to making it through the cold exposure is control.  Not control over the external world but control over the internal world.  Recognition of the discomfort that you are in and finding a way to become comfortable with it is a revelation.

WE LIVED IN CASTLES!  The wealthiest people used to live in a discomfort that we don’t really understand but they survived.  The human body, mind and spirit are actually set up to endure much greater discomfort than we put ourselves through on a daily basis.  The thing is that we’ve lured ourselves into the comfort trap.  We’ve trapped ourselves into a 10 or even 5 degree window of comfort.  It’s not the circumstance but rather our perspective on it that traps us.  We believe that we cannot handle the discomfort, so we live as if it were true.   The space between where you are and where you want to be is filled with the discomfort that you think you’re not ready for.  So the question becomes, do you want to live in comfort of your present life or in the castle of your dreams?  Neither of them requires your circumstances to change, the latter requires that you do!

As we are moving past the time when most people have given up on their New Year’s Resolutions, I offer this subtle reminder.  THIS IS WHAT YOU WANTED.  It is sometimes a difficult thing to swallow.  Goals and resolutions are pretty and shiny when we create them.  Everything will go great!  You’ll be able to maintain this level of excitement until you get to the end!  The problem is that we usually forget or don’t know the following.

When you set up a goal or make a resolution it is much like ordering your favorite dessert.  For me that would be the classic chocolate milkshake.  Unfortunately you forgot to read the fine print.  Before you will be served your delicious dessert, you have an appetizer of pain coming.  That will be followed by a main course of discipline with self-sacrifice sauce and side order of humility.  Once you are able to choke down those mammoth size helpings of something that YOU DIDN’T ORDER, you’ll finally get that thing that you wanted.

Just remember that THIS IS WHAT YOU WANTED, all of it is part of the deal.  Embrace it.  You’ll actually find at some point  halfway through the main course that you like the taste of it.  Those things that you overlooked on the menu are actually something that you want for yourself.  The problem is that most people retreat too early because THIS IS NOT WHAT I WANTED!  At the end of the meal you’ll have to settle up the check.  If you stuffed yourself full with meal and goal, the bill is paid with PRIDE.  If you left your meal unfinished, then you have a debt of REGRET that is difficult to wipe away.

Decide on what you want from the menu!

I love food!  Almost too much.  This is at least one of the causes of my battle with weight loss.  Cravings for things that taste good at meal time are a daily occurrence.  Although I know all of the reasons for a healthy diet, the struggle still exists.  Sometimes I win, sometimes I lose.  The other day I started to give some real thought to this dilemma.  At that time I realized that most meals are invisible.  It’s not that we can’t see them at all but rather that they only exist long enough to serve their purpose.  After they are gone, they are generally forgotten.

If you were asked, I’m sure you could probably remember what you had for dinner, lunch and breakfast yesterday.  However unless you eat the same thing each day or have a schedule, the memory of your meals probably only goes back a week or less.  Even take a special meal like Thanksgiving, you probably remember what you had but don’t remember whether the turkey was dry or how many helpings of mashed potatoes you had.  The power of a meal is the power of an instant.  Based on our national problem with obesity, it is easy to see that we have a problem with getting past those instances.

Choosing what we want most over what we want right now is the key to overcoming this issue.  It does not just relate to food and weight.  It is a failure to fully decide what we want before the instant of temptation comes up.  Being prepared to react to those temptations with a steadfast denial by saying with your actions, “I already chose differently.”  It is not easy!  Without a doubt, this is most likely a fight against years or even decades of habit and desire.  Depending on the habit, like me, you may be carrying around a large reminder of all of those momentary choices with almost no memory of the “joy” that they brought.

So if the memory is going to fade of these instances and you know they will, can you start to make a better choice?  Can you choose to not be overwhelmed by now in the service of later?  Whether it’s food, sex, anger, distraction, beer or any other vice that you may have, make your choice before the moment arrives.  Then carry that decision into tomorrow.  You are not a machine!  This will take time and practice but remember that your present desire will eventually fade in your memory.  Most meals end up being invisible.

Have a great week!