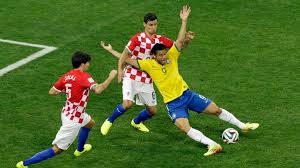 I’ve not watch a NFL game for about four years.  I used to love it but now I can’t stomach to sit through a play or two.  The exorbitant contracts don’t bother me.  Although the blind eye to domestic (or just regular) violence off the field do bother me, that’s not it either.  It’s the fact that the people inside the sport no longer want to play the game.  They want to play the system.  Rather than going for the ball, they go for the call.  Games are more about referees than players.  The game has become a sad shell of what it was.  I’ve got the same complaint about my preferred sport of soccer but it has not reach the point of boycott YET!  There are millions of dollars (or whatever currency) on the line, I get it.  The problem is that the we’re all being robbed, not just the fans.

The reason why sports are such an ingrained part of our world is that they are a metaphor for what it is like to be alive.  Whether it’s football, soccer, badminton or any other athletic endeavor; it is a meeting of body, mind and spirit that is a test on what we are capable of.  When you look at sport in this light, it is easy to see that every time that someone tries to dupe the referee and succeeds, we lose.  The fans, the players, the coaches and sport itself loses because we are no longer testing what we are capable of, we are finding out what we can get away with.  I’m not picking on professional athletes because unfortunately it has become a cultural norm.  The reason why I point them out specifically is that they are in the spotlight and have the ability to move the culture.  They train for most of their lives to become the best of the best on their field but then become snake oil salesmen when it truly counts.  And none of us will ever know!

We’ll never know what they could have done.  Had they just played through the foul, the contact or the almost contact of their opponent.  It puts the result of the day on the line for sure and I know that everyone loves a winner but at what cost?  If gaming the system is the most common way to win, then we need to consider very heavily what it is that we’ve lost.  More than likely it is the willingness to put it all on our own shoulders.  Until we do that, we’ll never know what we were capable of and that is the point.

So I beg of you, as you go out into your own life today, don’t take the dive.  Don’t look for the loophole or the shortcut.  Even though you’re not a professional athlete, we all have the opportunity to find the greatness within ourselves.  The key to that is that you must demand a higher standard of conduct.  Because if you don’t give it your all, you’re just never going to know!