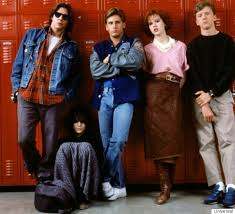 High school is a tough time for many reasons.  It is a time when young people are looking to solidify their independence from their parents.  At the same time they create new relationships that tend to define those years in so many ways.  It is extremely cliche but generally you are the company that you keep.  That is why cliques and labels become so widespread in high school because it is easier to lump people in with a group rather than take each person as an individual.  With everyone looking to discover who they are, they are not all that interested in finding out who everyone else is.

Perhaps I was fortunate that I had absolutely no idea who I was in high school and became quite comfortable with that fact.  I played soccer and ran track, so despite being athletic I wasn’t considered a “jock”.  My best friends smoked and listened to punk, so they would be considered “burnouts”.  Fortunately I liked the music but didn’t wear the uniform or pick up the bad habits.  My other circle of friends included at least four guys in the top ten of our class.  I got decent grades and loved learning things but refused to join the National Honor Society.  The adjective “normal” was used to describe me once and I took major offense.  At the time, I was just hoping for a better label.

In the end I’m not sure who the labels help more.  Does the label give the outside world a quick grouping system that allows them to dismiss the different?  Or does it give the individual a sense of self because they at least know their classification within the social class structure?

No matter who it helps more, it definitely has more possibility to hurt the individual.  This may not be in the “bullying” sense but rather a surrendering of self.  At this vulnerable time of life and in a society of pre-scripted paths, young people are capable of following to the point of almost non-existence.  They become the persona rather than a person.  None of this is particularly new nor likely to change quickly but in a world of almost infinite choices shouldn’t we be getting closer to being able to choose ourselves?

Be you today people!