“Comparison is the thief of joy!” I’ve heard it more than enough times in my life and I tend to believe it as a general rule. Especially in our social media world where a constant barrage of possible comparison points comes to our pocket, it can be easy to get sucked into a whirlpool of self-esteem damaging photos, videos and messages. It’s an uphill battle to say the least and the options or ending the conflict seems to be surrender or retreat. Neither of those options is 100% healthy nor practical. So my suggestion is leveraging it when it’s appropriate. Below is an example.

My uncle Bob, yes! the actor from a prior blogpost, was an accomplished runner in his 20s. In 1980, he qualified for and ran the famed Boston Marathon. In 1995, he was trying to make a return to Boston for the 100th running of the race by qualifying in the New York Marathon. At the halfway point, he was on target to qualify for Boston. Unfortunately he got a leg cramp and hobbled for a bit. He was considering dropping out of the race. That all changed when a person dressed in a Gumby costume passed by him. Something inside of him would not accept being beaten by Gumby! So he got back into the race and finished with a very respectable time of 4:00:56.

Comparison can be a problem there is no doubt about it. Looking at Bill Gates’ financial success is only going to make my financial world seem pathetic. However, complete denial of comparison is probably an unrealistic goal for most of us. Perhaps the Buddhist monks have it figured out but I sure don’t. So the only thing that makes sense to me is to leverage it when it is useful and ignore it when it isn’t. Uncle Bob got more out of himself with the brief comparison to Gumby. It was a catalyst to get him to do something that was in line with his abilities and goals on a particular day. He did not feel horrible at the finish line because he hadn’t won. That was a comparison that would not have served him. Nor did he compare his fame to the green claymation character. It was a tool that was used but then discarded.

So unless you are channeling your inner monk, there is a good chance that you are comparing from time to time. Let most of them go because they don’t serve. When it makes sense because your goals and abilities align with some healthy competition, so be it. Another option is having what Simon Sinek refers to as a “worthy rival“. They are not simply a competitor to be beaten. Instead they serve as mirror for us to look at ourselves and seeing their strengths allows us to see ourselves more clearly. In the long term the human experience is not set up in a win/loss scenario. There are too many metrics to determine who “wins” at life. However it is possible to define for yourself how to live a “good life” and align your goals and objectives with that. Seeing people who are already doing that which you want can be helpful and powerful, provided that you don’t bury yourself under the weight of comparison.

Who do you want to be? Now go be that!

Geometry was probably one of the easiest classes for me in high school.  Despite its relative ease, I had trouble staying engaged with it.  I found it tedious to give all of the reasons why something was true.  It was usually pretty obvious whether a problem was going to withstand the scrutiny of the different theorems that we were learning at the time.  So it seemed like a relative waste to my teenage self to write out all of the steps in proving or disproving a problem.  Especially when the answers (to the odd problems usually) were in the back of the book.

In our every day lives, there aren’t a lot of ‘proofs’ to be done.  Very few things are black and white.  So regardless of how SURE you are of your argument, there’s someone out there with the exact same information screaming the opposite (just think of our present political situation).  So if we have nothing to prove, maybe the aim should be to improve.

Although there are few cold hard truths that we encounter daily, we do have a sense of who we are personally and what it is that we want for ourselves.  So recognize the fact that you have nothing to prove.  Even if you were to prove something, the circumstances of tomorrow may wipe away the thing that your proved today.  However, each day we have the ability to improve.  In small and subtle ways, it is possible for you to see progress in yourself, your life and your circumstances.  Almost nothing about you is going to stand the test of time like Pythagoras’ Theorem.  That does not mean that your life is meaningless.  You are a sand castle that can be improved and enjoyed for the time that it exists.  Get digging and sculpting because when the tide comes in, you’ll wish that you had!

Have a great day! 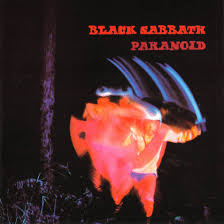 “Finished with my woman ’cause she couldn’t help me with my mind.  People think I’m insane ’cause I am frowning all the time.”  Those lines don’t even need the backing of guitars or drums to churn a feeling of very raw emotion in my stomach.  “Paranoid” by Ozzy Osbourne/Black Sabbath was the preferred soundtrack of my pre-high school years.  Despite its melancholy and borderline hopeless lyrics, it always seemed to be able to put me into a frenzy that required action of some kind.  My music selection at the time came as a surprise to many especially my middle school French teacher, Madame Gowie.

Although I’m not quite sure where my ability for languages came from, I was able to display talent even in middle school.  Nothing says “cool” in middle school better than being good in French class!  Unfortunately I was slightly unaware of what it took to be cool and became one of Madame Gowie’s favorites with the French name of “Pierre Paul” to boot.  The first time when I truly disappointed the good Madame was when I brought in a picture of someone famous for description.  My magazine picture of Ozzy Osbourne left her in a state of disgust.  Her thoughts about Mr. John Michael Osbourne were not positive in the slightest and it possibly changed her thoughts about me.  For my own part, I had a much stronger positive feeling toward Mr. Osbourne and the effect he had on my life.  So I took up the more normal disposition and disliked French class with my peers.

It was almost too easy for Madame Gowie and others to dislike Ozzy Osbourne.  He sang loud music that they disliked.  His song “Suicide Solution” had been under scrutiny in a court case where a family alleged that the song caused their son’s suicide.  He bit the heads off of bats and doves, what was there to like?

I’m not trying to portray Ozzy Osbourne as my hero by any stretch of the imagination.  My point is that for many people, his “evil” became a way for them to feel more righteous.  It is all too common of a practice today that we mask our own weakness and shortcoming by focusing on those who are worse than us.  If we are fat, we find the obese or our heavier past to feel good.  Do not look to the evil of others to find your righteousness.  You should be able to have a sense of pride in who you are and what you do without the disclaimer of comparing yourself to another.  It is a shell game that you can’t ever win.  “I can’t see the things that lead to happiness, I must be blind.”  There should be a level of autonomy to who you are and how you feel about yourself.  By comparing yourself to others too often, you are either inflating or deflating that which is unique and special about you.

“I tell you to enjoy life….” forget the rest.