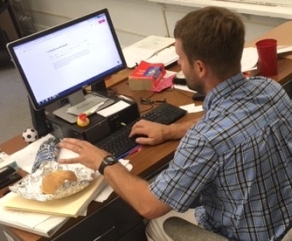 For the month of May, I decided to commit to publishing a blog post every day.  The stipulation was that if I did not publish a post, I would not eat until I did.  Today is the last day of my successful endeavor.  I was able to hold true to my word for the entire month.  There were definitely hours of hunger where procrastination seemed like the only thing that was on my plate.  But each day the publish button got pressed before the food went in.  Below are some reflections on the experiment and things to consider moving forward.

Stakes matter! – There were definitely times during the month that I would not have published a post under normal circumstances.  In the past, I’ve averaged about five posts per month.  I would only post when I felt “inspired”.  Even though I forced myself to go back to the keyboard every day, there was always something there to put out because there had to be.

Rules need to fit the actual outcome you want – For this experiment, I wanted to get my production up for sure.  The rules definitely did that but…  If I were to set up rules for posting a certain level of quality more often, I’d amend the rules in order to focus more on quality rather than quantity.  Such as I would require myself to write a blog post every day before eating but the publishing would be done more sparsely.  That way there is more of an editing process.

What’s your word worth? – Holding one’s self accountable is difficult.  Some people have trouble keeping their word when it is only them who knows.  They need an accountability partner or some other form of public pressure.  The key is to know who you are rather than assuming that what works for others will work for you.  I make deals like this with myself often, the other running one is about my consumption of iced tea.  If you need that extra push of being accountable to others, don’t worry about it.   The tools that work in the real world are the ones that matter, not the ones that work in our imagination.

Going the distance – As with any other endeavor, it’s best to sign up for a game that you have a marginal chance of winning.  As a first time experiment, a year would have been an overwhelming amount of time.  I’m not even sure that I would have made it a month if the length was a year.  It would have been too much too soon.  Now that I know that I can make a month, if it fit in with my life goals, setting a six month challenge for myself would be reasonable.  There’s no reason to set impossible goals for yourself just to impress people.  Your results are more important than your intentions.

Results – By writing every day, I was able to beat my average reads for the past year by 400% and the last day of May is not quite over yet.  Now I recognize that I raised my posting by 600% but I can definitely say that there was a positive impact.  My international numbers went up in certain areas.  I also had more “LIKE” and subscribes in the past month than any prior.  Also the number of old posts that were viewed by new readers was impressive.  So overall, I am chalking this experience up as a success.  I’m going to take portions of it and continue using them to improve my blog output.  However next month, I think I’m going to move my focus to my exercise routine and see what improvement I can make there.