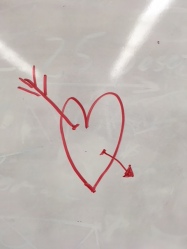 It’s Valentine’s Day!  One of my most memorable Valentine’s Days was in my sophomore year of high school.  At the time, I was single but not completely happy about that situation.  So it came as a huge but welcome surprise that I received two red carnations in homeroom.  The card didn’t say who they were from.  It just said, “Someone loves you!”  The rest of that day, I spent trying to figure out who could have sent them.  I’ll fully admit that I had a slight strut to my step throughout school.  My hope was that my secret admirer would reveal herself by the end of the day.  Unfortunately she did not.

So I went home and later that evening my mom asked me, “Did you get the flowers that I sent you?”  I was crestfallen to say the least.  I remember getting on my mom’s case about sending red carnations rather than pink or white.  But in all honesty it should not have mattered.  At the time I didn’t have the confidence or worldview to realize what I know now.  So if you’re one of those people lamenting “Singles Recognition Day”, take some time to consider my perspective.

If you are interested in eventually being in a relationship, recognize that you have a secret admirer someplace.  Perhaps you actually have someone that’s interested in you that you just don’t know about their feelings.  I know that I’ve found out after the fact several times.  Or there is someone out there who is looking for someone like you and they just haven’t found you yet.  And the final but toughest one to face is that perhaps you’re not a good enough version of yourself yet to attract that person you want.  THAT’S HARSH!  But may be completely accurate.

I went to high school with my wife and we did not date until after graduating college.  This was probably the best thing that could have happened.  If we had dated in high school, I doubt we would have ended up together.  I had to become a much better caliber of person in those years, so that I could attract someone like my wife.  My hope, in high school, was that someone was secretly watching and thought I was great.  In reality, I needed to work on being great so that someone great would be watching.

So if you’re not there yet and you’re lamenting your single life, write yourself a letter.  Write down a description of your ideal person.  Describe them in every small detail that you can.  Then write down who you need to become in order to deserve a person like that.  Once you’ve written them both down, put the description of your ideal person in an envelope and seal it.  Write next year’s Valentine’s Day’s date on it.  Take the description of who you need to become someplace where you’ll read it regularly.  If you follow through with this, I’m sure that you’ll be happy with the results regardless if you’re single next year.