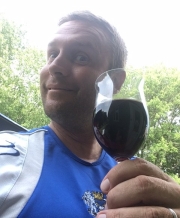 I remember it all too plainly.  Sitting in a cramped seat on an airplane flying back from Europe after almost a month of traveling with my best friend.  We had attended five games of the World Cup and visited a slew of sites and cities.  It was truly one of the greatest times of my life!  However on the plane ride back I repeatedly listened to the song “The God of Wine” by Third Eye Blind.  Despite the amazing experiences that I’d just had, I was heading back into a world that I could feel was going to hurt me.  For some reason this premonition got stuck within this song and I can return to any time that I hear the song.

The trip ended up being a deathblow to the multiple year relationship that I had forecast in my head to be “the one”.  Returning home should have been a step back into a world of known entities but instead it was foreign.  My girlfriend informed me that things were over on the night that I got back.  Our plans to move in together and any other future we had were now gone.  In many ways I was homeless.  The person and the future that I had put at the center of my universe were both gone and picking up those pieces was going to be difficult.  I’d love to say that the resilient part of me kicked in and I made instantaneous progress.  Quite the opposite, there was a long period of self-doubt, reflection and possibly some depression.  In the end I found myself sobered by the experience.  The song is like a time capsule where I get to travel back to who I was.  Looking back on that time I realize how appropriate the song was to the moment.  In many senses I was intoxicated by the future that I wanted from the situation.  I was running my life under the influence of what I wanted to happen but not acting in a way that was going to get me there.  The crash was inevitable.

So as we all move forward it is most important for us to keep our hands on the wheel, foot poised near the brake or accelerator and eyes on the road.  Issues arise when the idea of the destination overrides the moments of driving.  The process is where we spend most of our time.  Yet we allow where we want to be supersede where we are.  Remember not to fall in love with your future so much that you forget to live in your present.  There signs you must follow and detours you’ll need to take along your route.  Becoming intoxicated with your picture of the future may just end you up in a ditch!