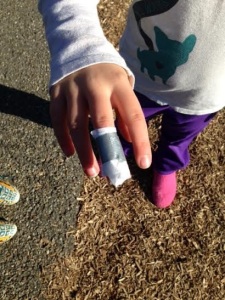 On Saturday at the park, my daughter cut her finger.  Nothing that required stitches but enough that pressure alone wasn’t stopping the bleeding.  I looked through the van for a band aid but came up empty.  So I took a napkin and some duct tape to fix up the problem.  “Dad, that’s not a band aid.”  She was right.  It wasn’t.  That didn’t matter to me and once it worked it didn’t matter to her either.  At a certain point, results are what we’re really after.  When you don’t have what you need, use what you have.  For as long as I can remember, I’ve been doing things like that.  Finding a solution for a problem with limited or unorthodox resources.  Perhaps I watched too many episodes of McGyver when I was a kid.  Or perhaps I care too little about form and put an overemphasis on function.  Regardless of the why, I have an affinity toward multidimensional thinking and it scares me.

I’m not scared because I do it but rather because so many young people that I know do not.   It is not particularly their fault.  Our society has curved off so many of the jagged edges that it is almost impossible to develop resourcefulness organically.  We can blame it on the internet, the government or any other scapegoat that is popular today but that’s the heart of the same one dimensional thinking that is the root of this problem.  Blaming a lack of resources or poor circumstances for our failure won’t get us anywhere but stuck.  People are far too quick to figure out who to hold accountable and very few people are stepping up asking to be responsible.

In essence that is where this blog started, the ability to respond to a problem with a solution that was irregular.  A napkin is a napkin, until it’s a band aid.  A problem is a problem until it is an opportunity.  Each of us has the opportunity to look at our own lives and see where we can push the limits of what is expected.  You have unique resources available to you.  How can you use them to make the world of those around you a little better?  What problem is out there for you to create a unique solution for?  You are who you’ve always been until you’re not.

Go out and do something great today!