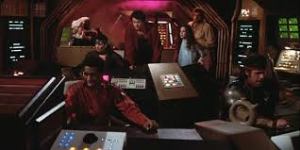 In the 1980’s Robert Urich (not my uncle), starred in a poorly made B movie called “Ice Pirates”.  The story is based in the future where the only resource that matters is water.  The ice pirates are a comedic band of humans and robots who initially try to steal whatever water they can find.  However they end up stumbling into a bigger adventure to help a Princess find her father who was lost looking for Mithra “the water planet”.    There’s more to it but I wouldn’t want to ruin it for you.

The ice pirates in many ways are not what I would describe as role models.  However despite their shortcomings, they slowly but surely move toward their goal.  At the beginning, they never could have anticipated where they would end up.  They make several mistakes along the way.  They don’t have the right resources.  Obstacles and enemies keep coming up to stop them.  Their path is not a straight line but a series of unexpected turns and setbacks.  They are me and they are you.

If nothing else, the Ice Pirates had a clear vision of what they wanted.  Perhaps you’re not even there but it doesn’t have to be as life and death as water.  It could be as simple as a goal for the day.  Regardless of how big or small you choose to make your goal, the way of the Ice Pirates is completely acceptable.  Stumble forward through each of your missteps and be prepared to laugh at your past mistakes.  Although you may be striving for the promised land, you are not a mythical creature with superhuman abilities.  You are fallible and should expect to fail OFTEN!  Victory is not guaranteed to those that begin with the greatest advantage.  It is guaranteed to those that continue until the prize is won.

PS – Don’t watch Ice Pirates unless you have two hours to kill and go in with low expectations!