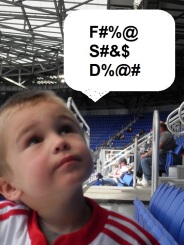 About a year ago my son, Luke, and I went to a Red Bulls game.  He was eight years old at the time.  On the ride home we were listening to the music from my iPhone.  At one point, a song called “7 Words” by the Deftones came on.  I quickly switched the song because it is a hard and aggressive curse-laden song.  He asked why I changed it and I told him that the title of the song was 7 Words and that it had a lot of cursing in it.  He probed further about why it was called 7 Words.  I explained that there were seven major curse words that most people recognize as bad.

Much to my surprise Luke said that he thought he knew them all.  We seemed to be having a “man to man” discussion, so I gave him the green light to test his seven.  He started off two for two with the F and S.  Then he stumbled a bit with his next two selections.  There was another F in his seven, “frick”.  I informed him that it was actually a replacement for his other F.  Then he went to another S-word, “sex”.  Again I explained that sex was not a curse word which was unfortunately followed by the question “what is sex?”  I got instantaneously nervous that I was going to have to have “the talk” with an eight year old.  Luckily my explanation that sex was another word for gender or boys/girls seemed to appease him.

I was reminded of that incident several times today as I was speaking to the 8th graders of HMS.  It is extremely tough to know until you know.  That may seem like cryptic language but I’m being very literal.  Until you go through certain things for yourself it is difficult or even impossible to fully understand.  My goal was to give them some tools to work with and I hope that I did.  However there are things that you need to go through for yourself to understand like how to get over a broken heart or deal with the betrayal of a good friend.  We can put these things in the manual with instructions but they can’t particularly be taught.

Life has a series of missteps and pitfalls that we must go through.  We can avoid some through the help of others.  However some things we just need to experience for ourselves.  You don’t know what you don’t know until you know it.  You know?